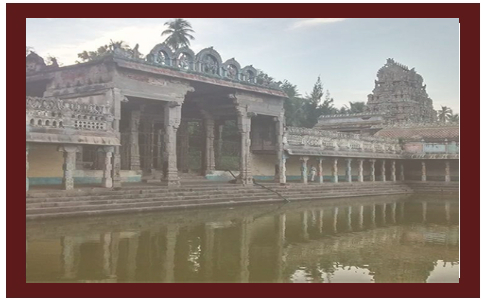 At Vaitheeswaran Kovil, the God himself takes the form of a healer, Lord Vaitheeswaran, and treats his devotees to health.The Vaitheeswaran Kovil also houses the shrine of the God Angaraka (Mangala) who relieves his devotees of any problems following the Chevvai Dosham through the pooja offered on Tuesdays.The Siddsmirta tank (or the Siddamruta tank i.e. the pond of nectar) is the miraculous spot holding the key to cure many ailments.

The clay found in the tank is used to prepare the medicine known as ThiruchanduUrundai which can treat many diseases.The great Lord Shiva is the destroyer and a progenitor of several deities and essential aspects of Hinduism. He is considered as the Layakartha of the universe, the one who keeps it in balance.He is the hermit who can meditate peacefully atop Mount Kailash or in the cremation grounds without care for worldly customs or luxuries. He is also the loving husband to the Goddess Parvati, the Warrior God’s father, Lord Kartikeya, and the first-worshipped Lord Ganesha.  He is described as the Tripurari, the annihilator of the three cities built by the Asuras, and he is also the Bholenath, the simple one who grants whoever prays to him.When the most vicious poison Halahala threatened the entire universe, he, without hesitation, drank it to save the living beings.Similarly, at Vaitheeswaran Kovil, he banishes the disorders from the devotees’ bodies who seek his blessings in the form of Lord Vaitheeswaran, the great healer.

The place where the God Angaraka was cured

However, it is an all too familiar knowledge that immortality can never be granted to the beings who crave it for their selfish desires. Knowing so, the Asuras had creative ways of begetting boons from either Shiva or Brahma. Take, for instance, the Asura, Mahishasura, who asked for a boon wherein no man should be able to defeat him, only to meet his end at the hands of the Goddess Mahishasuramardini. Then there was the Asura, Vritra, who had been blessed that he could not be defeated by any weapon made of ordinary means, only to be slain by Lord Indra through the weapon Vajrayudha – which was made from the bones of the sage Dadichi.Now, Andhaka became another addition to the long list of Asuras who thought they could cheat death with their ‘clever’ boons by praying to Lord Shiva, whom even the God of death bowed. He asked Lord Shiva that whenever a drop of his blood fell to the ground, his clone should arise from it, to which the Lord agreed, and the boon was bestowed to him. Soon, the haughty Asura unleashed a reign of terror upon the entire universe, being nearly invincible with the help of his army and the clones who arose when his blood fell to the ground.Ultimately, the Devas pleaded to Lord Shiva to end him once and for all; and so, the Lord came face-to-face with the arrogant Asura, only to encounter the same problem again and again.After a long time, even the Lord showed signs of tiredness as drops of his sweat fell to the Earth. From those drops of sweat arose the God Angaraka.

Soon Andhakasura found himself pushed to the corner as the God Angaraka prevented the Asura’s blood from reaching to the ground, and thus, he met his end in the fight.

Such is the power and the greatness of the God Angaraka, who resides in Vaitheeswaran Kovil and his temple, is one of the Navagraha temples; for this was the place where he was treated by Lord Shiva himself in the form of the Lord Vaitheeswaran when God Angaraka was afflicted by leprosy.

The place where Lord Kartikeya was cured

Supradaman was a powerful Asura who unleashed a reign of horror in the universe, so when none of the Devas could eliminate him, they turned to their commander, Lord Kartikeya, for help.In the ensuing battle, Supradaman was killed, but not without seriously injuring Lord Kartikeya’s army. Then, Lord Shiva came in the form of Lord Vaitheeswaran and healed the wounds in this sacred place.It is also said that Lord Kartikeya had worshipped Lord Shiva here, and in return for his devotion, he obtained his weapon (Vel trident) in this place.

This holy place is also the spot where Lord Rama, Lakshmana, Jatayu, the pious Saptarshis, and even the deity Surya have obeyed Lord Shiva. There is a pond in the temple complex dedicated to the mighty Jatayu, called Jatayukundam. According to our mythology, when the valiant Jatayu expired, his last rites were conducted here by immersing his ashes at this pond.

It is also said that Lord Shiva incarnated as Lord Vaitheeswaran to cure a devotee named Angahara who was afflicted with leprosy.

The Siddsmirta tank, near the southern gateway of the temple complex,contains medicinal clay and along with the holy ash, this medicine, called ThiruchanduUrundai is said to cure many diseases of the devotees who seek it. Another preparation made to serve as a medication is the mixture of Chandan powder (Sandalwood powder) and Saffron blessed by the Lord himself. Apart from that, a mixture of salt, pepper and jaggery are offered near the Siddsmirta tank to cure one’s diseases. At times, devotees purchase silver-plated images of body parts that are afflicted by various ailments and put them into the Hundi (A large container for offerings) to be cured by those ailments. The essence of the neem leaves and the neem barks derived from the SthalaVriksha (Temple Tree) of the temple complex is also served to the devotees as a medicine.

On Tuesdays, devotees offer special pooja to the God Angaraka to get rid of theChevvaiDosham(malicious effects caused by planetary motion) by offering Toor Dal and Red Arali flower to the God Angaraka; as the red colour signifies his fiery nature. The benefits of the pooja include good health, improved financial conditions, freedom from poverty, success, resolving of marital problems etc. Not only is this sacred place the abode of the Lord Vaitheeswaran and God Angaraka, but it also houses the shrine of the Lord Kartikeya and that of DhanvantariSiddhar. In fact, this is the place where Dhanvantari, who according to Sage Agasthya belonged to the ancestry of LordMaha Vishnu, attained Jeeva Samadhi. As such, the devotees can obtain special oil from the temple and apply it to affected parts to seek relief.The Lord Kartikeya, revered as the God Muthukumaraswami is offered a naivedhyam (food offering) of milk rice for the Arthajamapooja along with Sandal, Flowers, Rosewaters, Lime, PacchaiKarpooram (Borneol) and Punugu (a traditional cosmetic paste). The abhishekam is performed with Sandal and a Sari is offered to the Goddess Thaiyalnayaki. Another form of worship at the Vaitheeswaran Kovil is the lighting of lamps in rice cakes, known as Mavilaku ma.

The PanguniUthramfestival, celebrated in the month of Palguni (March-April) is marked by the auspicious Brahmotsavam held to commemorate the day when Lord Shiva and Goddess Parvati got married. It also celebrates the day when the Lord Kartikeya and Devasena, Lord Rama and the Goddess Sita, Lord Ranganatha and the Goddess Aandal had their nuptials.

The KarthigaiDeepam (festival of lights) is celebrated in the month of Karthika (mid-November to mid-December) when the elder son of the Lord came into being the six-faced God. According to the Puranas, his six forms were united by the Goddess Parvati on this occasion.

SkandaShashti (or KanthaShashti) occurs in the month of Aippasi (mid-October to mid-November). SkandaShasti is commemorated to celebrate the victory of Lord Kartikeya over Surapadmana. Usually, the festival starts six days before the Shashti and concludes on that day. During the entire duration of the festival, devotees recite the hymns related to Lord Kartikeya, read stories of him and enact hisfeats on the stage.

The Goddess Aandal, one of the celebrated Alwar poets in the Tamil tradition is celebrated through this festival; also known as AandalJayanti. The Goddess Aandal is considered as the consort of the Lord Ranganatha himself and many devotees throng for the festival, wherein the priests offer glass bangles to the Goddess and then distribute them among all her devotees.

This sacred place is also famous for palm leaf astrology or Nadi josiyam or Vaitheeswaran kovil Nadi jothidam. This type of astrology is based on the palm leaves that held the key tomany significant events, whether in the past, present, or future.

It is said that the Vaitheeswaran Koil Nadi josiyam came into being through the works of the great sage Agasthya who had tutored Lord Kartikeya himself. The sage Agasthyais considered an individual with a highly developed consciousness, in addition to the fact that he is also the head of the revered Siddhars and an inventor of the early grammar in the Tamil language.The Vaitheeswaran Koil Nadi astrology is one of the earliest forms of astrology practised by our forefathers, a treasure chest of their knowledge.The Siddhars had recorded the life experiences for the future descendants of the land. Several people have reportedly discovered information about their previous births by getting the precise text that corresponds to them. These records were then etched on palm leaves in painstaking detail – there are approximately one hundred and eighthuman categories;a unique thumbprint of an individual is then broken down to determine the soul grouping or bundles, which can comprise anywhere between twenty and twenty-five distinct palm leaves. Only then, the specific palm leaf containing the information of one’s life is located.This attention to the nuances corresponding to the existence of each individual is what makes accurate nadijosiyam predictions of one’s life.Hence, the nadijoshiyamm of Vaitheeswaran kovildemands extensive training from a reader to have a basic comprehension of the signs and the text used in the leaves.It is also said that the Vaitheeswaran Koil Nadi Jothidam are divine records of the conversations between Lord Shiva and the Goddess Parvati.As per the knowledge inscribed in the texts associated with the Nadijosiyam, the Nadi for every person holds the records and the presence of the events in the past, present, and future; the JeevaNadi, in particular, holds the forms of the present thing happening.The palm leaves associated with the Vaitheeswaran Koil Nadi josiyam were initially stored in Thanjavur’sSaraswati Mahal Library in Tamil Nadu. Unfortunately, the British colonialists set their evil eye on the Naadi leaves concerned with the herbs, medicine, future prediction, etc.  As a result, they went on to acquire it, and in the later years, some of the Nadi leaves got destroyed, while the remaining were auctioned during the British Raj (rule). Thankfully, some of these Nadi leaves were obtained by the families of astrologers at the Vaitheeswaran Koil Temple and have been passed down from one generation to the other from the past years. It has to be noted that the knowledge of interpreting the Nadijosiyam at Vaitheeswaran Koil follows a very complex set of methods to follow and cannot be comprehended by everyone.Although with such a harmful attempt to deprive us of such knowledge, the Nadijosiyam at Vaitheeswaran Koil has been serving its purpose to this day.